Do you think that he is hearing good news or hearing bad news?

Reading names of the dead and missing at Ground Zero is an anguishing experience.

Model on the runway in a Paris fashion show at Printemps.

95 years old is good reason for some serious reflection.

She's sits clutching her bag tightly at all of the family get togethers.

Morning Train From The Plane

The train to central Paris after an all night flight.

A cool move at the Princeton Tango Festival in New Jersey.

Happy To Still Be Making Music

An older Buenos Aires street performer who still seems to enjoy her work.

Mothers Of The Missing

Angry mothers have marched for about 40 years by the Casa Rosada in Buenes Aires.

Ellis Island train terminal used by immigrants to scatter throughout the U.S. 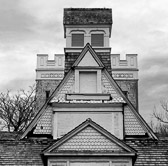 A scene found along the New Jersey Shore.

Gaudi's unfinished masterpiece in Barcelona is still under construction. 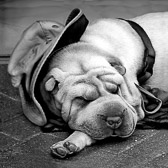 A sleeping dog should not be disturbed from his afternoon nap.

One of the many squirrels that seem to make their home in our back yard.

I got really close and he seemed to want to have some conversation.

Birds Were Meant To Be Free

A pair of captives at the Sunday bird market in Paris

A Bird In Hand

This bird was rescued when it fell from it's nest onto a street of busy traffic.

A memorial to a fallen war hero in Les Invalides, Paris.

The maze was part of an art installation in a New York City gallery.

The Foley house in Freshford, Ireland was home to twelve people.

The New Jersey side of the Hudson River just across from New York City.

Blowing In The Wind

Could this be what Bob Dylan predicted was going to be blowing in the wind?

Patterns in black and white on tile steps in Palm Beach, Florida.

Close up of a stable door at the Roosevelt Estate in Hyde Park, New York.

If only the objects found in antique stores could talk.

A window seen in an antique and art store in a small Vermont town.

Wind surfing is one way to indulge an addiction to speed.

A colonial table display at the Lewisburg Fort in Nova Scotia.

The spread on my brother's kitchen table.

A close up study in patterns and textures.

A typical circular staircase found in many Paris apartment buildings.

Canal transportation is one way to get around the city of Suzhou China.

Creatures In The Car Wash

Imagined creatures appear in the water patterns at the car wash.

An invitation to enter into the unknown.