The "Nanas" of French Sculptress Niki de Saint Phalle that I transported to the Jersey Shore.

Another of my re-imaginings a Niki de Saint Phalle sculpture.

A Niki de Saint Phalle Nana at the 2014 exhibit of her work at the Grand Palais in Paris.

A Niki de Saint Phalle Nana placed by the Eiffel Tower for her 2014 retrospective in Paris.

A Niki de Saint Phalle sculpture between the tower and the Seine.

A memorial to those killed in Oklahome City.

John Ahearn's Ernestine is made happy and hopeful by Barak Obama.

Is it boredom that this long time married couple is feeling?

Lady Of The Lake, Spring

The mist adds to the mystery of the lady during the iris season.

At The Cutting Edge

The warrior faces the cutting edge of fatal danger.

Almost every French village has a memorial for their soldiers lost in two World Wars.

Monet and Renoir are recalled at New Jersey's Grounds for Sculpture.

This regal stone lion is found on Palmer Square in Princeton, New Jersey.

Reflection In The Window

The lady of the lake is reflected in the terrace doors at the Grounds for Sculpture.

This lanky cowboy scupture was seen on a Texas road trip.

This sculpture by Walter Schott known as the Untermeyer Fountain is found in New York City's Central Park.

A sound sleeper at the Grounds for Sculpture in Hamilton, New Jersey.

At the Grounds For Sculpture, Hamilton, New Jersey.

Patterns of glass and fabric in my dining room.

Lady of the Lake, Summer

Looking through the mist at at the lady of the lake.

Seen in a private garden in the south of France.

A young visitor at the Grounds for Sculpture is suprised by his discovery.

She sits in sadness in the Montmartre Cemetery in Paris.

His 1st US baseball game is remembered at Journal Square, Jersey City, NJ.

She is based on Manet's painting Le Déjeuner Sur L'herbe. The peeper is my grandson in his Halloween costume.

These nappers were seen on Bloomfield Ave. Montclair, New Jersey. 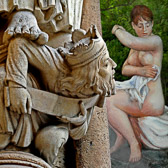 Three For The Opera

A Seward Johnson work at the N.J. Grounds for Sculpture.

Renoir is recalled by this couple drinking wine at the Grounds for Sculpture, NJ.

A sculpture seen in a restaurant on Maryland's Chesapeake Bay Bridge.

Lonely At The Top

Abe up close and personal at the Lincoln Memorial in Washington D.C.

The sculpture is found in the Tuilleries Gardens in Paris.

Detail on a war memorial commemorating France's peace with Germany.

This statue in a seaside park in Lima, Peru is a favorite place for lovers to have their pictures taken