Drive-in dates are recalled at a car show in Daytona Beach, Fl.

A person feels very insignicant staring into the vastness of the Grand Canyon.

He sings a joyous song.

Surf fishing at the Jersey Shore requires positive thinking and lots of luck.

It's difficult to tell the viewers from the sculptures at the Miami Arts Festival.

At the Grounds For Sculpture in Hamilton, N.J.

An abandoned building reminds us of the ecay of many American cities.

Colorado On My Mind

Wild flowers thrive in spite of a continuing Western drought. 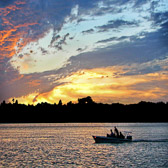 A reminder of a problem that our country still has yet to overcome.

Each evening people gather on the beach in La Jolla, Ca. to catch the sunset.

Monet's bridge at Giverney is recreated at the Grounds for Sculpture in Hamilton, N.J.

Another view of Monet's bridge recreated at the Grounds for Sculpture.

The Oregon Coast seems like one very long sand dune.

Our Flag Was Still There

The Seattle market is a feast of food, color and interesting people.

Ready For Some Action

Patience is required to catch striped bass in the New Jersey surf.

Adobe contruction is not often seen outside of the U.S. Southwest.

So Where's The Fish?

They are found in many other places besides the south of France.

An antique cast iron wheel in Richmond, Virginia along the James River.

Welcome To The Island

Many New Yorkers get away from it all at Fire Island off the coast of Long Island.

In the U.S. there is still opportunity to be what ever we want to be.

Visitors from another country at the Mall in Washington, D.C.

This bridge was photographed in Weston, Vermont.

Soaking Up The Sun

The scene at South Beach, Florida.

No Longer In Service

An abandoned gas station in a population shrinking southern town.

She's already being groomed to become an American princess.

Corvettes get a run on the track before the Rolex 24 Hrs at Daytona in 2012.

Looking at the way out at the Philadelphia Penitentary.

He just missed the boat.

Forgiveness will cost you five dollars at this small town church in Vermont.